If you’re anything like me, you’ve struggled to feel like you fit in with your peers. I always felt “not good enough,” “not smart enough,” “not pretty enough,” “not skinny enough.” It’s enough to make your head spin, yep, spinning all the way to the candy counter. Indeed, there’s nothing like chocolate and sugar to make you feel better – for about a minute or two, while you are shoving the candy in your mouth.

It’s hard enough feeling like a failure in your own head, but what about in front of millions? I. Can’t. Imagine.

Carl Hagelin was drafted by the New York Rangers in 2007 (a dream come true – drafted by an NHL team!) and began playing for them during the 2011-2012 season. Over the course of four seasons, Hagelin seemed to fit right in. Then, in June 2015, he was traded to the Anaheim Ducks. Presumably, this fan favorite was traded due to salary cap issues. A speedy winger, Hagelin’s move to the Western Conference meant the Rangers wouldn’t face him often – likely a relief to the Rangers’ goaltender, Henrik Lundqvist.

Hagelin struggled in Anaheim and in mid-January 2016, he was traded again. This time to the Pittsburgh Penguins. Another cross country move – and to a team that’s a division rival to his original Rangers. All this back and forth moving would be hard enough, but in addition to that, Hagelin had to adapt to new teammates, new playing styles, new home ice conditions and new cities. He clearly managed it well. In June 2016, Hagelin helped lead the Penguins to a Stanley Cup victory! 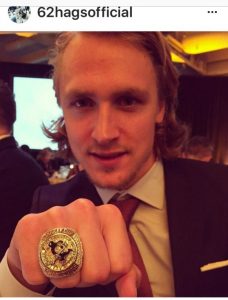 As a Rangers fan, I hate watching Hagelin play for another team, especially an opponent like the Penguins. As a sensitive soul, I applaud Hagelin’s ability to adjust to the circumstances. I admire his strength and fortitude. It’s impossible to know what he was going through on the inside, but on the outside he performed like a professional and made the best of the situation.

Fitting in and Staying Healthy

As a people pleasure who used to try to live up to everyone else’s expectations, when I had something like this happen to me – when I didn’t fit in, I turned to cookies, sugar in mass quantities and chocolate. For other people, comfort foods can be pizza, pasta or mac & cheese. Using food to provide relief for emotional pain is a common challenge.

Over time, I’ve learned to cope and embody some of Hagelin’s tenacity and resilience. I’ve recovered from an eating disorder and learned to love myself. Just as Hagelin has a coach who believes in him, I had a therapist and coach who believed in me. And now I’m blessed to be able to coach wonderful women (and men) on their road to recovery – and fitting in to a life they love. It’s not always easy, but living a healthy, happy life is definitely worth the effort.

Not fitting in can be a blessing. It keeps us moving until we figure out where we belong. And then…the sky’s the limit. 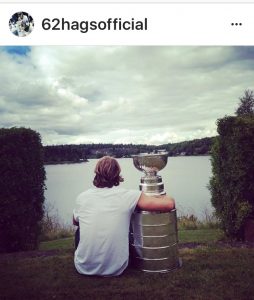