I love a good awards show. The glitz and glamour get me every time. I love to see what the women are wearing – the colors, the jewels. Last night’s Golden Globes ceremony was no different in that regard, but I also got some lessons in self-esteem.

Anne Hathaway’s poignant portrayal of Fantine in “Les Misérables” earned her a Golden Globe for Best Supporting Actress. After thanking the Hollywood Foreign Press for the award and “for having me in his room full of extraordinary artists that have changed my life with their work,” Anne continued, “Thank you for this lovely blunt object that I will forevermore use as a weapon against self-doubt.”

There I was, staring at the television, thinking how could this beautiful, talented award-winning actress have self-doubt? On one hand hard to believe, on the other, I realize she is human like the rest of us. Now she has a meaningful statue to remind her of her extraordinary achievement (after all, she was in a category with former Golden Globe and Oscar winners including Sally Field, Nicole Kidman and Helen Hunt).

Do you have an object to support you? Something to remind you that you are beautiful and fabulous and worthy? What about a note from a loved one? A thank-you note from a friend when you made them feel special? Next time a colleague, client, staff member or boss gives you a compliment, write it in a special place. And then, when something isn’t going your way and you need a pick-me-up, you can refer back to that moment and remember that the current situation is just a bump in the road. 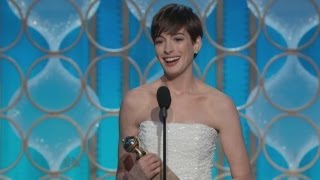 The other highlight for me was Hugh Jackman’s acceptance speech after he was named best actor in a musical or comedy by the Hollywood Foreign Press. Of course, he thanked the behind-the-scenes producers and director and his fellow performers. Then, he divulged that he almost gave up the starring role of Jean Valjean in “Les Misérables” only a few weeks before it started filming.

Hugh looked at the film’s director,  Tom Hooper, and said, “Tom, I never told you this,” and then shared with the audience:

“Three weeks before we started filming, we had a terrible day of rehearsal. Humiliating day,” he said, adding he told his wife: ‘It’s time. I have to ring (the director), tell him someone else should play the role. I’ve bitten off more than I can chew.’ My wife talked me off the cliff like she talks me (down) most days.”

I’ve been a fan of Jackman’s for a while and saw “Les Misérables” and cannot imagine any one else in that role. Lucky for his fans, he has his wife to support him, that “special” someone who is there when the chips are down. While it is hard to believe someone like Hugh Jackman has doubts in his abilities, and even harder to think what could have gone so terribly wrong that he was humiliated on set, it is nice to know he has his wife to be by his side with unwavering support.

Who is your special someone? For me, it is my husband. I’m grateful for his support.

5 Responses to "Lessons in Self-esteem from the Golden Globes"